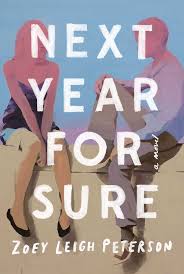 Zoey Leigh Peterson’s debut novel Next Year, For Sure (Doubleday Canada) follows a long-term couple, Kathryn and Chris, through a year-long experiment in non-monogamy. When Chris can’t stop thinking about an exciting acquaintance named Emily, Kathryn encourages him to see where his interest leads. It eventually leads Kathryn to the communal house where Emily lives, and to one of Emily’s housemates, Moss. In the second installment of Maisonneuve's Blog CanLit book club, Editor-in-Chief andrea bennett and Associate Editor Kim Fu discuss. (Warning: spoilers ahead!)

andrea bennett: I have a personal question for you right off the bat: have you ever been in a polyamorous relationship?

Kim Fu: Explicitly defined as such? No. You?

ab: Not really. I've been in what Dan Savage coined, I think, as “monogamish” relationships. So pretty monogamous but with certain flexible rules.

KF: Before we get too deep into a thematic discussion, I want to point out that we both loved the book, and talk quickly about why.

ab: Sure. I just wanted to frame the discussion with an upfront admission about where we were coming to it as readers. Why did you love the book?

KF: It's very rare to see characters in these situations written about sympathetically and realistically, in all their complexity, with no villains, no gender throwbacks, no more-enlightened-than-thou, not even subtle proselytizing for any one answer. And there was a clean, quiet perfection to the prose—funny and affecting and just right-on without ever drawing attention to itself. Even just to see love and sex presented in a way that resonates with how I experience them—that honestly almost never happens.

That's a lot, I realize. Why did YOU love it?

ab: Ha! Oh man, this might be a boring conversation because I love it for those reasons too. When you say the prose has a funny, affecting tone—the narrator is a close third-person, but you can really really feel the narrative presence in this subtle way: the narrator is so tender with the characters, all of whom I came to feel tenderly about as a reader. I ID as non-binary and it has really been important for me, personally, in relationships, to seek a sort of balance in terms of the gender roles, if that makes sense. I don't often see that reflected back to me as a reader. I so appreciated that.

There were moments I felt frustrated with the characters—Chris, get your shit together and stop being an overlappy serial monogamist!—but in this way that I still wanted everything to work out well for him, and yeah, he didn't feel like a villain or anything.

KF: Chris is so interesting, from a writing perspective. While men who kind of need to be in love with someone (and so "overlap") occur in literature (and life) often enough, they're usually written about by, presumably, a similar dude who lacks self-awareness (poor me!) or as an immoral ass who's trying to justify being a womanizer. But Peterson handles Chris with such care—she outlines how it feels for him, like his needs don't jibe with any of the available models (neither ethical polyamory nor monogamy), without ever letting him off the hook for the way he hurts people. And his responsive, low-libido sexuality complicates it further. It's just so real!

ab: That sums Chris up well. Kathryn and Emily and Moss (Moss to a lesser extent) are given that same, full treatment, too, which helps. One interesting, telling moment comes late-ish in the book, when Chris and Kathryn's relationship is winding down, and for Chris that means that maybe his relationship with Emily will ramp up. But that's not what she wants.

KF: Yes! And Emily was clear the whole time about what she wanted, who she was, and Chris just assumed it would change to suit what he wanted and how he pictures relationships.

There's another moment like that earlier in the book that I loved, because it kind of indicted me as reader. When Kathryn asks Emily what else she does, in addition to housecleaning and dogwalking, is she an artist or something? And Emily says something like, "I do this." Not everyone has to live life like you, Kathryn! (/Kim, the reader.)

ab: Yeah, that moment was good, too. And again it typifies the sort of gentle handling of things in this book.

I was also really drawn to Moss—I liked the way he was introduced early on and how he grew as a character as things progressed.

KF: Me too. Especially how he was a counterpoint to the more familiar style of Chris and Kathryn's love: hyperverbal, romantic-domestic, in-jokes, processing feelings. Moss offers a different kind of care and way of relating to Kathryn, meeting needs that often go unnoticed or unmentioned.

ab: I related to Moss. I pictured him as sort of a lumbering bear. I'm not hyperverbal or cute, like Kathryn and Chris in a relationship—my partner and I don't stand next to each other brushing our teeth in the morning (the bathroom is for privacy!) and we don't nickname stuff at our house (other than the cat). You can tell Moss is a caring person, but he doesn't exactly fit the extroverted communal-house vibes around him. He was just sort of an oasis character for me as also a bit of a grumbling-bear-type-person. I try really hard to talk and reassure people verbally but my natural self is probably more like Moss reading a book at a table full of people.

KF: I'm not the first person to make this observation, but I think as you get older, the cutesy-hyperverbal thing becomes less important than Moss-style concrete care. Teens and whoever makes rom-coms are looking for someone with whom to talk all night on "deep" subjects and exchange sexually charged, rapid-fire quips at restaurants. I think into your thirties, it's more like, who do I want to drive my mom to the hospital? Who really hears what I'm saying? Who makes it easier to get through each day? Who fixes things? Who fucks well and makes me a sandwich when they're making a sandwich? You know.

ab: Maybe it's an age thing. You and I are also eminently practical human beings, I think. When I was younger I based more of my dating decisions on straight-up lust. But I still ultimately wanted what I want now, which is respect and understanding.

KF: I was definitely less sensible when I was younger…

What did you think about the risky stylistic choices? The phone call transcripts, the chapter sub-headed by different "feelings," the one sub-headed by what each character wants, etc.? Do you think they were used well?

ab: For the most part. I am an old, so I felt the same thing I initially feel when I see risky stylistic choices (some version of dread) but I trusted the narrative presence so I just kind of went with it. I think the real payoff re: stylistic choices is the MAY, JUNE, JULY, AUGUST sections—they roll by empty. That did a couple things. 1) It made me pause and let things sink in a bit (I *devoured* this book). 2) It added to the... ah, for lack of a better term, realism of the book. Like we're just peeping in on these people's lives, and they're real people I'd probably have a friend in common with in Vancouver.

KF: I also read this book in one day! A day when I had other things due.

ab: What did you make of Kathryn's (ex?) best friend, Sharon? We sort of see their relationship unravel over the course of the narrative.

KF: I found her most compelling at the beginning, as a concrete way of getting at Kathryn's need for/fantasy of a larger community. It's something I've been thinking about a lot, and speaks to some other things I'm reading—that we're evolutionarily designed to live in bigger groups, but in our society, we act like we can get everything we need from one partner, both practically and emotionally. Which puts a huge amount of pressure on those relationships.

ab: I hear that. The living-in-larger-groups thing is something I think Kathryn finds at Ahimsa, the communal house, too. But it's interesting—that's not exactly what Chris needs from his non-monogamous relationships. I appreciate that complexity. I don't know what I'd like for myself, exactly—the idea of living in a larger group is appealing for a number of reasons, but I think I probably have some trust issues I'd need to work through before really being all-in.

My sisters and I sometimes joke about living in a "Fu compound.” And even though they drive me a little crazy, I think I'm the one who likes this idea the most. I like having private space, but having people who are just...there, to share childrearing and pet care and meals and security—that appeals to me a lot. The only neighbors in my complex who I knew even a little bit, who could play that role in the most minor way (we watched their dog, they brought our trash bins in), moved away recently, and I was way, way more upset than made sense for a such casual acquaintance.

I'd love to live next door to you, for that matter. And watch your (future) baby, and see you for coffee every day.

ab: I meant the more intense "living with," for the record—the kind where your lives are enmeshed. I have definitely had many dozens of roommates over the years, as a non-money-having individual—even when I was living with a partner. But also for the record, please move in next door to me.