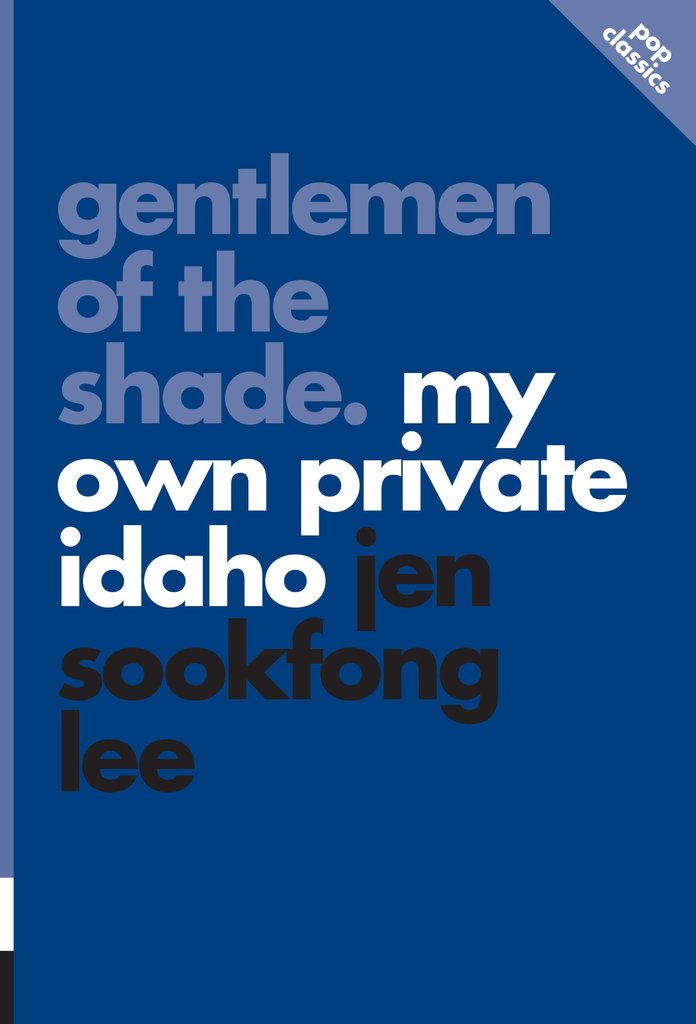 I was enchanted by Jen Sookfong Lee’s Gentlemen of the Shade: My Own Private Idaho (ECW Press), the latest entry in ECW’s Pop Classics series. As a high school senior in 1991, the Vancouver author saw photos of River Phoenix and Keanu Reeves in Interview magazine, and was so drawn to the images that she skipped school with a friend to see My Own Private Idaho. (About a year later, on the other side of the country, I grabbed the VHS from a local rental place in Toronto, and had the awkward misfortune of watching Gus Van Sant’s iconic hustler film with my father and brother; within the first five minutes, River Phoenix is shirtless and receiving oral sex from a middle-aged man.) Teenage viewers like Lee and myself, in the sexual twilight zone of high school, found catharsis in the characters of Mike and Scott and the rest of their dramatic, drug-obsessed gang, and felt kinship with their search for temporary comfort in the chaos of life. I recently had a chance to talk to Lee about her new book, yelling at parties, and the cultural roots of fandom.

Nathaniel G. Moore: Reading Gentlemen of the Shade feels like reading someone's diary, in a way; it’s genuine and intellectual, but it's not difficult or dense—like a great conversation at a party. When you started writing this book, how did those initial hours of creation go down?

Jen Sookfong Lee: Those first hours were very stream-of-consciousness, in a way. I had written an outline when I pitched the book to ECW and, for the most part, I stuck to it during the writing process. However, so much of the content within the chapters was really meditations on all the emotions and thoughts My Own Private Idaho provoked in me. I have always had a very intimate connection to that film that wasn’t easily articulated or intellectualized, so I knew Gentlemen of the Shade couldn’t read like an academic treatise. Nor did I want it to!

It’s funny you should say that about a party conversation. My interest in cultural criticism started while I was drunkenly yelling my theories on how any cultural phenomenon is connected to a zeitgeist or revolution. I’m really glad I finally put some of that into a book! Makes me less tiresome at the bar.

NGM: In your book, you touch on River Phoenix's early life, and the possibility he was sexually abused, and how it informed the character of Mike. Even though Gus van Sant wrote the lines, obviously, River's personal life came through in his performance. I feel as though Phoenix’s life and death were a huge part of our adolescence, which perhaps we as Gen Xers haven't fully come to terms with, on some level.

JSL: River Phoenix (and, by extension, Mike) is a fascinating figure for many of us, I think. His death didn’t have the same reach as Kurt Cobain’s, largely because he was an actor who purposely obfuscated his real self and, of course, privacy was still possible in the 1990s. Kurt Cobain, on the other hand, was in the business of selling his personality as a musician, whether he liked it or not. However, River was a blank canvas on which we could project our alternative dreams. He was visibly alternative enough that he appealed to those of us who felt marginalized, but he was also a cipher and many of our forming thoughts on individuality and making space when no space was afforded to us seemed to be projected on to him. Will we ever fully process his life and death? I doubt it. His filmography is too thin for that and has been overshadowed by his brother Joaquin’s work and life.

NGM: I’d describe Gentlemen of the Shade as a type of informed, spiritual nostalgia. I had a better word for “nostalgia” when I was in my car this morning.

JSL: For sure Gentlemen of the Shade trades on nostalgia. I didn’t try otherwise! My goal for the book was to really examine the intense nostalgia I had for the film and that time and try to figure out why it all came together as it did for me and a bunch of people I knew who identified as social misfits. I’m a firm believer that our love for cultural moments always has its roots in bigger phenomena. You can call it zeitgeist or whatever you want, but no intense fandom exists in isolation. There are reasons rooted in cultural politics that explain why Beyoncé speaks to so many people, for example.

NGM: Do you think people born around when the film came out, who are now coming of age, will find this film? What do you think they will think of it? What have younger readers thought of your book?

JSL: You know, I have some friends who are younger than I am, who saw the film for the first time because of my book (which is a lovely thing for friends to do). For them, I think it feels like a historical piece, which makes me feel so old, but there it is. What I think struck them is the way gender and sexuality were treated but also the aesthetics of film from the 1990s. I do think that people who are interested in LGBTQ films and issues have seen My Own Private Idaho. It is part of that canon, after all. Honestly, I meet so many people of all ages and communities who love that movie, so I think it remains a classic that gets viewed to this day. I’m biased though!