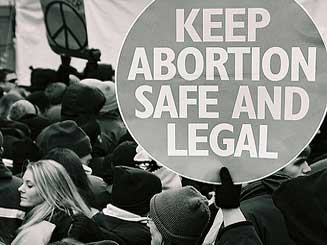 In January 2017, the abortion pill finally arrived on the Canadian market. This was more than fifteen years after the US okayed the drug, and almost thirty years after France did. The World Health Organization had deemed it an “essential medicine” more than ten years ago.

It’s a decades-long story. The pill was first developed by a French pharmaceutical company, Roussel-Uclaf, in the 1980s. Known alternately as mifepristone and RU-486, the pill made it unprecedentedly easier to have an abortion within the first ten weeks of gestation—more private, less expensive and available where surgeons weren’t. That ease of use, while helpful to women seeking to end unwanted pregnancies, alarmed opponents of abortion. Anti-abortionists dubbed the pill “a human pesticide” and threatened boycotts against Roussel-Uclaf’s parent company, according to a book chapter, “A Political History of RU-486,” written by law and bioethics professor R. Alta Charo.

“Let's have the courage to say so openly,” quotes Charo, reproducing Reuters quoting a Vatican newspaper. “A way of killing with no risk for the assassin has finally been found.”

The backlash was successful. The French government had to intervene to force Roussel-Uclaf to bring the pill to market in France, and the company expanded only tentatively afterwards. Roussel-Uclaf never opted to make the pill available in the US; instead, under pressure from pro-choice groups and politicians, the company licensed it to a non-profit, the Population Council. Mifepristone was successfully made available in the States in 2000.

Around the same time, there were also clinical trials underway in Canada to help bring the pill here. But one of the first participants died in 2001. Researchers later concluded that the woman died from a bacterial infection that wasn’t clearly related to mifepristone. But the death still tainted the study—it was “temporarily halted” as a result, and never resumed.

“You could think of it as more a question of when a random event happens,” explains Dr. Beverly Winikoff, an expert on the development and registration of medical abortion. If one person dies out of every three hundred thousand people who take a drug, that’s considered an acceptable risk. But it matters if it’s first person to take it or the three hundred thousandth.

“It was a big shock,” says Winikoff. “I think it generated a lot of fear in regulatory agencies and physicians.”

In the aftermath of the halted trial, advocates struggled to bring mifepristone to Canada. Private companies, such as Danco Laboratories, explored the possibility but never followed through. North America’s long and sometimes violent history of anti-abortion activism played a role in drug companies’ hesitancy to bring the drug to market here, says Joyce Arthur, the executive director of the Abortion Rights Coalition of Canada.

“They said, ‘Oh no we’re not going to do that because you shoot doctors there,’” Arthur recounts. “It was the political atmosphere and the violence against providers at the time, and it really had an effect in terms of making distributors and manufacturers more hesitant about bringing the drug to market in North America.”

There were also nonpolitical factors at play. Health Canada’s approvals process is relatively slow and demanding, and the country’s relatively small population means pharmaceutical companies don’t prioritize bringing product here. As a rule, drugs take longer to get to the Canadian market.

Health Canada was too demanding when it came to approving the pill, alleges Ellen Wiebe, who led that ill-fated Canadian clinical trial. Sources familiar with the process informed Wiebe that the agency required redos of established research, ignoring evidence from the many countries where it was already available—French women, for example, had been taking it for more than a decade at that point.

“To ask for more new data, because some of the data was old—which is what happens—was not scientific, not sensible,” Wiebe says of her experiences with Health Canada in the late nineties and early 2000s. “I was shocked at some very anti-choice attitudes and some very unscientific statements that I heard from some of the Health Canada officials.”

“That was a very specific time and place that I had direct evidence that people were using their personal attitudes to interfere with contraceptives and abortion drugs getting into Canada,” she adds.

Health Canada denies Wiebe’s allegations. The agency’s chief medical advisor, Supriya Sharma, asserts that there was also no political interference with mifepristone during its recent approval process. “I can say with the utmost confidence we treated it like any other medication,” she says. Another spokesperson for Health Canada asserted that the agency’s requirement to present up-to-date research is “standard practice.”

Now that it’s available, the pill is making a difference. At the Kensington Clinic, the majority of patients—a couple hundred people each month—seeking early pregnancy terminations (seven weeks or earlier) now opt for mifepristone instead of surgery, which used to be their only option.

But advocates caution that while the pill has opened up an alternative option for many people across Canada, access to it remains uneven. Albertans can now get one in Fort McMurray, for example, instead of having to travel to Edmonton or Calgary. But in Manitoba and Saskatchewan, among others, abortion remains largely inaccessible outside of preexisting providers’ footprints in the cities.

“I think we need to see this as a long game,” says Frédérique Chabot, the director of health promotion for Action Canada for Sexual Health & Rights. “There’s a lot of things that need to happen to really take advantage of the potential of [mifepristone].”