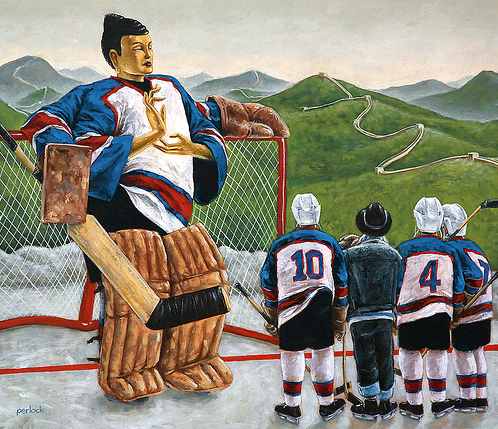 My friend Pujee is a hockey player from Ulaan Baator, Mongolia. His real name is Choijiljav Purevdavaa (and you thought “Tverdovsky” was hard to say). When I first met him in 2003 he drove a nearly destroyed Jeep whose side and rear-view mirrors were long ago pillaged and sold for scrap. It was the perfect ride for the rubble-filled craters and dead-brick mountains that give the Mongolian capital its post-apocalyptic look. But this torn gray canvas was Pujee’s home, and as we steered through the city’s tilted streets and dirt hills—I was there making a movie for the CBC about my hockey travels abroad—he pointed out the highlights: the deep bright snow ringing the edge of the city; the Skylab and Let it Be discotheques (built after Mongolia’s liberation from the Soviets); Buddhist monasteries; soldiers patrolling on snorting horses; and two outdoor hockey rinks.

There was no plaque affixed to Pujee’s wreck, so you’d be excused for not recognizing him as the father of Mongolian hockey. But Pujee—who was inducted into the International Hockey Hall of Fame in 2007—has done as much as anyone to professionalize the sport in his country. He devotes his waking hours to coaching the city’s youth teams, organizing tournaments, fund-raising, and building outdoor rinks. Like other Mongolian boys, he fell in love with the game as a child. From the balcony of his family’s apartment, he would watch Russian factory workers play on natural ice, and then would tape together the broken sticks they left at rink-side. At forty-five, Pujee enjoys slightly better access to equipment. One afternoon, I accompanied him to the train station, where he passed a fistful of American dollars to a friend bound for the region’s nearest sporting goods store in Irkustk, Siberia, ten hours away. The friend would return two weeks later with a bouquet of thirty new Sher-Woods, the tools with which the Mongolian National Hockey League would start its eighth season.

Prior to the internet and Mongolia’s democratization after seventy years as a Communist satellite state, Pujee’s only exposure to professional hockey had been through a Russian translation of Bobby Hull’s I Live to Play. He’d also tried Ken Dryden’s The Game in Czech, but didn’t get far. Later, he procured an NHL rulebook, which he translated into Mongolian. It became clear during my stay, however, that the country’s isolation and limited resources hadn’t slowed down the game’s phenomenal popularity. Pujee wanted to take us to Banghanor, a small, industrial town where, he told us, spectators gather on horseback to watch local mining teams play shinny. But time and the weather prevented us from going. Instead, joined by Bobby and Battaan—two of the country’s split-toothed hockey veterans—Pujee relished telling stories about what it was like to play in the dead of Mongol winter. The wind coming off the Gobi desert, he said, was so strong it would knock you off your skates. He remembers coming in on a breakaway, and being blown sideways to the ice. Other times, the puck would split into three pieces and skate blades would crack.

It was this kind of bloody-mindedness that led to Mongolia finally competing internationally at the 1999 Asian Games in South Korea. Their inaugural game was against Kazakhstan. Because it was also their first time playing indoors—there still isn’t a single covered rink in the country—the team wasn’t used to the warmth of the arena. Pujee remembers how unsettling it was to be playing while swimming in one’s sweaty armour. Also, since their skates had been sharpened to suit the rough, bumpy outdoor rinks of home, they slipped and slid once they hit the smooth, fast ice. Pujee said that none of the organizers had told them that the referees would speak English, and because they only knew Mongolian, they ignored icings that weren’t, and skated through off-sides that were. For much of the game, it was like they were playing to the wrong end of the ice.

The Mongol goalie faced 127 shots in his first game. Pujee brought a videotape to our hotel room and we saw how, midway through the final period, he could barely stand, playing the last ten minutes from his knees. The Kazakhs won 42-0. Nik Antropov, the Toronto Maple Leafs’ draft pick, scored ten goals. He scored from centre ice, the blue line, the slot. (I met Antropov in Kazan, Russia, a few years later, and told him that I’d seen this tape. He glowered above me in the hallway of the rink. “No,” he said. “It was twelve.”)

The Mongolians lost their next game against Japan, but as they prepared to face Thailand, Pujee was determined not to see his team finish in last place. The Thais came out flying, but the Mongols held steady. They answered each Thai goal and as the game moved into the third period, Thailand led 4-3. The Mongolian National Team found themselves in a place they’d never been before, with a chance to win their first international hockey game.

Pujee led the comeback, tying it four all. Then, late in the third period, he moved towards the high slot, gathered in a pass, and lifted the puck over the goalie’s shoulder: 5-4, Mongolia.

It was the greatest moment in Mongol hockey history. The team’s photo appeared in every newspaper back home. The kid with the broken sticks became his country’s first hockey hero.

I heard most of these stories on my first night in UB, as if Pujee had been waiting for years in his hockey hinterland to tell them. That night, Pujee had taken me to a shack that doubled as the team’s clubhouse, where many of the game’s elders hung out. With a wood-burning stove pushing heat around the clapboard walls, we cracked bottle after bottle of Mongolian vodka and listened to the old men talk about Mongol pride. Bobby—who traditionally booked off his job at the copper mine in the winter to play hockey—swore that, one day, Mongolia would conquer Asia as Genghis Khan had done before. With the light of the stove’s fire playing upon his face, he reminded us that the Chinese had built the Great Wall to keep the Mongols out, and that it wouldn’t be long before they’d need that Wall again.

It was also thanks to Pujee that I crossed paths with the Dalai Lama. A few days before my encounter, Pujee had brought me to Mongolia’s largest monastery—one of the few that hadn’t been razed by the Soviets—where I was guided by a half-dozen monks in their gold and red robes up a long staircase to gaze over their sixty-foot bronze Buddha, bejewelled in light and colour. While standing on the landing, they mentioned that the Dalai Lama was returning for his first visit in more than thirty years. I asked if he might play a little hockey while he was here. One of the monks grinned and stepped a few feet back, making swishing sounds while pretending to stickhandle a puck around the sacred floor, remembering the cold winter days of his youth while playing on the city’s rogue ponds.

A few evenings later, Pujee and I were wandering through a half-built apartment block when we came upon a small crowd of people gathering for an appearance by the very deity himself, who, like me, was bunking in one of UB’s small, newish, Western-style hotels.

After hearing that the Holy Man was about to make an appearance, Mike Downie—my friend and director of the CBC hockey documentary—pushed me from behind to the head of the line yelling “Buddhism! Number One!” and “star quality” and “taking shots on the Dalai Lama!” Before consenting to this, I asked if I could hold my stick while waiting in the line-up. “Brilliant idea!” Mike said, imagining, no doubt, that the Lama would stop in his tracks, fit my gleaming Easton between his hands, and impulsively work a cracked brick puck through the city streets. Mike disappeared, then returned with my Excalibur.

The Lama strode out of the hotel flashing his smile before being whisked off to a waiting Town Car. As the driver inched down the driveway and cruised towards us, a pulse of joy travelled through the crowd. The car moved slowly so that everyone could take in the great man, who sat in the passenger side, tipping his head, waving and smiling. It was really quite a scene, with the sky darkening into a low blue-black, brightened only by the thick falling snow.

As the Lama passed me, I did what any red-blooded Canadian hockey player would have done: I thrust my stick at him. My opponents, many of whom have been on the wrong end of a spear or cross-check, might suggest that this reaction was instinctive, but I wasn’t actually attempting to jab the Lama (or his car). I was simply hoping that the Holy One might offhandedly bless my graphite one-piece. As the blade curved across his sight line, I saw him lower his head and, I sensed, incant a small prayer: a canticle to an Easton. For the next few months back home, I carried my stick with a blessed-by-God permanence, pretty much shooting at the net every chance I got. And then, one day, the stick exploded at the heel. Maybe it wasn’t a prayer that the Lama had incanted after all.

(Read an interview with Dave Bidini)