ONE MORNING ON THE LONDON TUBE, the District Line ground to a halt between stations. Roused from her commuter stupor, a woman reached into her blouse, drew out a crucifix and kissed it. When the train lurched to life thirty seconds later, she leaned toward a gentleman reading a tabloid. “I don’t like it when the tube stops like that,” she said. “Who can guess what evil lurks down the line?” 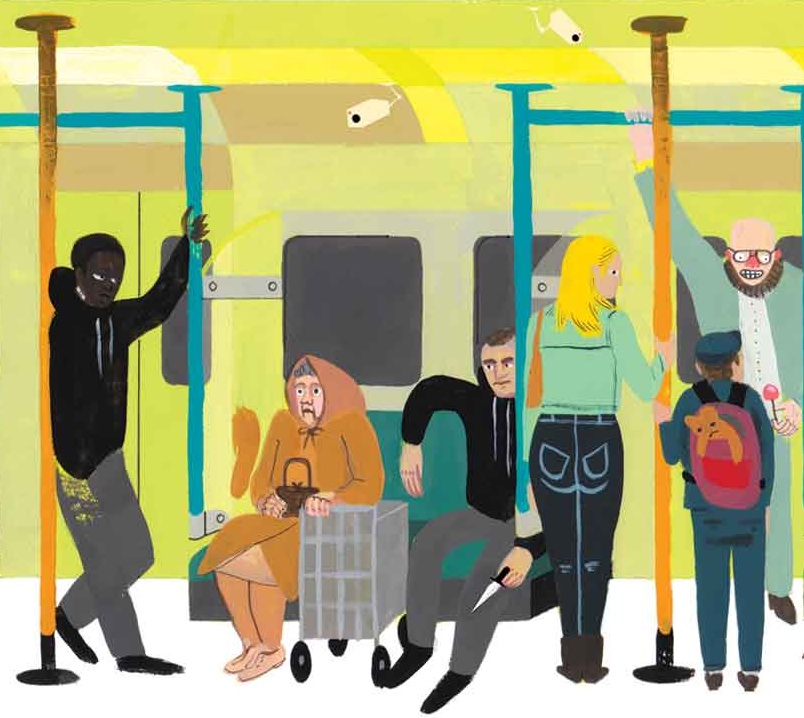 It’s a scenario Daniel Freeman knows well. A clinical psychologist at King’s College London, Freeman is a leading expert on the desperate states the human mind can work itself into despite the facts (cancer, for example, is roughly 500 times more likely to strike that female tube-rider than a suicide bomber on a subway car). Exaggerated feelings of suspiciousness and mistrust were once considered a mental illness afflicting a tiny percentage of the general public. But in Paranoia, the 21st Century Fear (2008), co-written with his journalist brother Jason, Freeman concludes that a growing number of otherwise healthy Western Europeans and North Americans have become susceptible to irrational worries they can’t control and, as a result, behave out of proportion to actual risk. Paranoia—the fear that other people intend to do us harm—is on the rise.

In his thirties and prematurely grey, Freeman works at the Institute of Psychiatry, a green-glass building in Denmark Hill, a shabby, low-rise south London neighbourhood where day-drinkers crowd the  off-licenses (cornerstores that sell cheap beer). It’s exactly the kind of environment that, if Freeman’s research is correct, has become a hotbed for apocalyptic fantasies and bogeymen. One in four people now experience regular paranoid thoughts about everything from how sleeper cells are swarming their communities to how their children will be abducted by strangers.
“Before I started,” he says, as we settle into his uncluttered office, “the traditional view was that persecutory delusions were inexplicable, hard to understand and should be considered empty speech acts. But when I talked to patients, the content of the conversation was about fear, about anticipating threat. I began to think about that, and realized that this anxiety was also common in the general population.”

Freeman’s findings were gathered in a ground-breaking study he began in 2006. Donning virtual-reality headsets, subjects walked around a busy 3-D subway car populated by a cross-section of London society (the experiment was planned before the underground bombings in 2005). Each human-like avatar was programmed with neutral behaviours: a woman who glances up and smiles when you look at her; a man standing by the door who stares but avoids eye contact; a brooding youth at the end of the train with a Band-Aid on the back of his neck. After completing the laboratory simulation—two hundred underwent the four-minute ride between stations—participants were handed a questionnaire. The results were revelatory. Although the computer-generated characters were deliberately designed not to provoke, forty percent of test-takers reported hostility during their time on the train. (“There was a guy spooking me out—tried to get away from him,” one person recorded; another said “A lady sitting down laughed at me when I walked past.”)

Subways turn out to be perfect paranoia-generators. “On a subway, you’re around other people and can’t escape,” says Freeman. “Many feel trapped and socially exposed.” By creating controlled conditions that could catch panic-prone minds in the act of getting things wrong, Freeman’s virtual-reality machine solved one of the biggest problems with studying paranoia in a laboratory setting: the gap between the deeply subjective experience of one’s fears and their translation into standard surveys. “If you tell me ‘They’ have removed your brains and internal organs, then the diagnosis is clear,” says Freeman. “But if you say you’re afraid that your children may be taken by a pedophile, or that people are gossiping about you, these things do happen. Most paranoid fears reflect real-life threats. Sometimes it’s hard to tell whether someone is paranoid or fully justified.”

The subway test also confirmed for Freeman that “galloping urbanization,” as he calls it, is transforming our minds. Social isolation has hobbled our decision-making skills, turning urban environments into an endless array of misperceived dangers. To be sure, this is not a new insight. We’ve known for years that cities have higher levels of paranoia as compared to rural areas (one study, for example, found mental disorder  is more frequent in UK neighbourhoods with rooming-houses where strangers share bathrooms and kitchens). But Freeman also argues that the recent spike in paranoia is a legacy of the Bush-Blair years. There is a direct link, in other words, between the politicians’ insistence that Saddam Hussein possessed and was preparing to use weapons of mass destruction, and current British panic about “hoodies” and “feral youth” who reportedly swarm, stab and rob pensioners. Two out of three people in the UK believe crime is rising, even though it has been declining throughout the industrialized world since 1997.

Paranoia, in fact, includes a striking table which illustrates a drastic rise in media mentions since 1995 for words like asylum-seeker, terrorist, pedophile (“a big one” Freeman says), criminals and mugger. Because the press constantly reminds us of these dangers, we overestimate the odds of being hurt by them.

“Over-reporting means we don’t focus on the real risks,” says Freeman—risks like heart disease or road accidents. We depend on the media to keep us informed, but by pushing stories about terrorism the media also makes it easier to believe that strangers plot in dark corners to destroy our way of life. Of course, fear of terrorists and pedophiles is an altogether different kind of paranoia than the “sincere” kind created by true stories of, for example, tainted blood, or fast-tracked pesticides. A legitimate cause of worry, Freeman explains, should be tied to its actual rate of occurrence, not how frequently it gets mentioned in the media. If internalized, mass fears can skew our capacity to correctly interpret and assess risk, and can make us behave in strange ways.

He uses himself as an example. Fifteen years ago, while a grad student, Freeman got mugged. He’d just been grocery shopping and didn’t have any money on him. He handed over his wallet and the thief ended up running away with a bunch of receipts. The experience resulted in Freeman avoiding places where he thought he could get mugged again. Eventually he got over it. But what if, he asked himself, the experience extended beyond a couple of weeks? What if, thanks to all the over-reporting of crime, his newly emboldened anxieties began to rule his every action—always looking over his shoulder, seeing muggers at every turn? At what point do normal attitudes for living in an urban environment (vigilance, precaution) become self-destructive?

“I label things paranoid when it’s unfounded or exaggerated. What we need to do is take a calmer, more measured approach. How likely are these events to occur? And what are the strategies to deal with it that don’t have significant trade-offs? You can keep yourself really safe by staying inside and fitting out your place with fantastic security, but you will suffer psychological damage.”

Swine flu is a good example of what Freeman means when he says that the media creates and amplifies our fear. During the first week of May, newspapers all over the world published similar front-page photographs of people wearing masks, alongside stories filled with WHO quotes about swine flu being upgraded to pandemic status. Despite this overreporting, swine flu, as it develops, clearly has the potential to hit humanity like the Spanish flu epidemic of 1918. Vigilance (washing your hands, sneezing into your elbow, avoiding travel) is necessary. Under the right conditions, in other words, fear can be healthy.

Freeman’s proposals about dealing with paranoia? A more responsible media would help. The BBC, for example, now has an in-house editorial board that tries to keep the broadcaster from sensationalism (and indeed, one of the positive aspects of the swine flu “crisis” is that some recognition of media overreaction ended up being edited into the very narratives that caused our fear: eventually newspapers ran stories about what the appropriate level of concern should really be).

Better urban planning, more open spaces, would also be a plus. The important thing is to make sure “your response isn’t causing more problems”—like, say, a bus about to sideswipe you while you wonder if swine flu is biological terrorism spread by Al Qaeda.

In short, we need to become detached observers and learn to see our fears in an ironic light. Something Freeman admits—as the road outside darkens under a Brezhnevian gloom, and tens of thousands of CCTV cameras record the faces of Londoners burying their thoughts—is probably easier said than done.