Merrill Garbus has this voice—sometimes she sounds like a eunuch, sometimes like she’s laying down a reggaeton track, sometimes like she’s disembowelling a zebra on the savannah. The other thing that everybody mentions: Garbus made Bird-Brains with just a digital recorder and Audacity. Take the LP out of its plastic sleeve and everything—vinyl and cards of lyrics—falls out, because it’s just squeezed between the unattached halves of an old, recycled record jacket (my copy is from the Exodus soundtrack).

Drew Nelles: You’re at your parents’ house right now? Where is that? 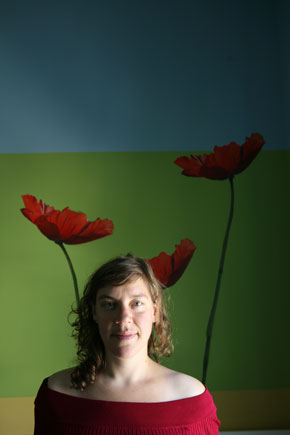 DN: I’m always amazed that so many musicians split their time between cities like that. Don’t you get exhausted from so much back-and-forth?

MG: The answer is...yes. I’m not Canadian, so that’s part of the reason I have to do this. I travel all the time and I’m usually not in one place for too long. Now that I’m making a little bit more money playing music, I’m trying to be a little bit more humane with myself. It looks like I’ll be moving to California in the fall—it seems like a really beautiful place to move to.

I’m realizing that I’m really exhausted and it’s difficult for my voice. But it’s hard—even if Montreal isn’t my home, it’s been my unofficial home for the past few years. It’s strange to do interviews and say that I don’t live in Montreal because I technically can’t. I’ve lived in Vermont a lot, to play with Sister Suvi and Tune-Yards around Montreal. I don’t think Tune-Yards would be what it is without Montreal—it’s just an open-minded and supportive community in a lot of ways.

DN: You’ve said the DIY process behind Bird-Brains makes it a feminist effort.

MG: I saw it as that afterwards. I didn’t feel about it as, “I’m going to be a feminist and make an album about it.” Being on the road a lot as a woman, you don’t see a lot of other women around, and when you do they’re not necessarily in lead roles or in roles as songwriters. It always bothers me on the road, whether with Tune-Yards or Sister Suvi, and at a certain point I realized it’s not often that you hear about a woman doing an entire project on her own. There’s often an assumption that there’s someone behind her doing magical things. And I’ll love to collaborate with other people, male and female, in the future. But for this album I really thought it was a nice thing to be able to say, for better or for worse, that I did this all by myself. I hope that inspires other women. The ability to be independent as a woman is a feminist statement of sorts.

MG: I enjoy the role of being a powerful woman, no matter who I’m performing with or what I’m doing. For me, it’s less a statement of “I will never ever perform with men”—of course I will. But the truth is that I can do so much on my own, and I do not want to ever have to downplay that in my relationships with other male musicians.

DN: It strikes me that this DIY recording thing is anti-classist, too—although you have to be able to afford the digital recorder and the laptop.

MG: I mean, I’m aware of my advantages and privileges as an upper-middle-class white person—and upper-middle-class American—but there’s a hint in my recording method of the ability to use what you’ve got to create something. The only thing I spent was time, plus the gift of a laptop and the gift of that recorder, vs. the $30,000 some people spend making an album. I worked a number of jobs during the creation of the album, but time is certainly something that people often don’t have. 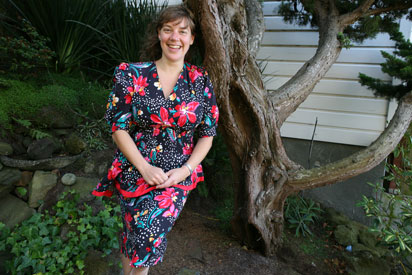 DN: Were your born with this voice that you have, or did you make it? How did it happen?

MG: I was born with musicality from my parents, who are both musical. But when I listen to recordings of myself, even from age twenty-six, they’re very different. Perhaps I was born with the desire to make certain sounds come out of my mouth, but it was only doing it, and doing it live with people, that enlarged that confidence behind it. The confidence that is breath and air and focus—that all took a long time.

DN: What’s your Pop show going to look like? Any big secret surprises you can let us in on?

MG: There are big secret surprises. When is this article going to be out?

DN: It’ll be out before the show, so you don’t have to tell any actual secrets. Just drop some hints.

MG: Okay. Visual stimulation is one thing. And a large group of people is another thing. And new songs.