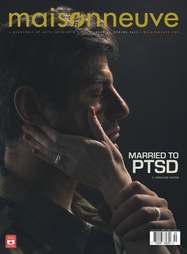 IN MAY 2008, posters started springing up on lamp posts and mailboxes in Edmonton’s Garneau neighbourhood. ATTENTION RA‘PEST.’ WE ARE WATCHING YOU. WE WIL [sic] FIND YOU, read one. DEAR RAPIST: I AM NOT CHANGING MY LIFE BECAUSE OF A PATHETIC FUCK LIKE YOU!, said another. Many were signed Love, the Sisterhood, and pointed to a Gmail account where community members could send any leads.

The posters were distributed by the Garneau Sisterhood, a loose and anonymous collective that formed after three women living in a one-block radius were raped. The Edmonton Police Service issued a public advisory warning people to be “diligent about locking doors and windows at night.” A fourth attack in the adjacent Aspen Gardens neighbourhood led police to advise any woman “living alone” to be vigilant. The warnings included only a general description of what the attacker might look like.

The Sisterhood’s website describes their poster campaign as a response to “the vague warnings and media sensationalism [that] contributed to a community of fear.” The campaign countered the police’s assumption that women should take extra precautions by turning the spotlight back on the behaviour of the perpetrator. The Sisterhood wasn’t interested in policing women—instead, it aimed to reclaim the neighbourhood as a safe space with the message of community support.

Police responses to sexual assault and domestic violence are often lacklustre. A 2004 study for the Department of Justice Canada found that 19 percent of respondents decided not to report due to fear of the criminal justice system. Because of the legal system’s unpredictable responses, some women have started taking matters into their own hands, searching for justice outside of the courtroom.

MONTREAL’S FIRST RAPE CRISIS CENTRE was founded in 1975. Diana Yaros has been working there since 1979. She has noticed some positive changes, such as the 1983 criminal code reforms that made it possible for women to charge husbands with rape. “I can’t overstate how taboo a topic rape and incest was when we started organizing in the seventies,” she says. “Unless a woman was raped, killed and it was in the news, we simply didn’t talk about it.” But Yaros says it’s still difficult for women to access justice, especially when it involves intimate partner violence. “If you’re reporting an assault of minor, [the police] will respond. If it’s a stranger rape, they’ll respond. But most rapes occur between [the victim and] someone [they] know,” she says.

Jane Park* found this out the hard way.

When she filed a sexual assault report to the Montreal police against a former partner, she was immediately told that there was a 99 percent chance that the prosecutor wouldn’t take the case due to lack of evidence. A couple of weeks later, a detective rang her. Park thought he was calling to schedule a formal interview. Instead, he decided to dish out relationship advice. “In the first two minutes of our conversation, without knowing anything other than the basic details of my case, he told me this was just a dispute and I should try to work it out,” Park says. She was shocked. “He said it was similar to the kind of disputes he and his girlfriend had all the time.” Months later, she received a call saying that the prosecutor had decided not to pursue her case.

She decided to file a report regardless. “It felt like it was something I could do to assert myself. I wanted to feel like my voice wasn’t being silenced, like my story was being documented,” she says. “Instead, I was being told what happened to me hadn’t happened.”

The high rates of unfounded sexual assault cases bolster anecdotal claims, such as Park’s, that survivors are often belittled or dismissed by police. In 2014, a Royal Canadian Mounted Police (RCMP) officer in Parrsboro, Nova Scotia, pocket-dialled the cell phone of a woman who had just called in a domestic violence case. Her voicemail recorded a man laughing and asking, “So, did she deserve to get hit?”

THOUGH SOME ACTIVISTS PUSH FOR stronger sentencing laws as a deterrent to sexual assault, Constance Backhouse, a Canadian legal historian, argues that punitive sentencing for rape does little good. She says that the goal is to stop sexual violence—not simply to punish a perpetrator. Though she lobbied for legal reform in the eighties, she’s now rethought her position after coming to the realization that prison is not the answer.

Instead, Backhouse has been exploring what a feminist approach to justice looks like. One of Backhouse’s proposed ideas is to divest money from the prison system and invest it in feminist artists and creators. “People can be stopped from being violent. There are probably very few people who need custodial care,” she says. “I’m not sure what the solution is, but it’s definitely not expanding mandatory sentencing.”

Sometimes, the ones who are supposed to be enforcing justice are actually the perpetrators of violence. In 1969, Jack Ramsay, an RCMP officer in Pelican Narrows, Saskatchewan, picked up a fourteen-year-old Aboriginal girl from home and took her to his office. After questioning the girl about her virginity, he asked her if she would like to have sex with him. In 1998, a provincial court convicted Ramsay of attempted rape. By then, Ramsay was a member of parliament. He received a nine-month sentence. Court judge David William Ramsay (no relation) had a habit of picking up and assaulting wayward teen girls in the northern British Columbia towns he pre- sided over. In 2004, nine years after his crimes, Ramsay was found guilty of buying sex from minors and breach of trust.

Acknowledging that Canadian criminal justice is bound up with the violence Indigenous Canadians experience under colonialism, Indigenous communities such as Hollow Water in Manitoba and Alkali Lake in BC are investing in traditional modes of healing, including survivor-directed community healing circles. In these spaces, survivors, along with the support of the community, engage in dialogue and a healing contract with the abuser rather than pursuing criminal charges. “Through cultivating alternatives outside the state, we rename the systemic nature of a lot of violence we experience,” says Krysta Williams, a coordinator at the Toronto-based Native Youth Sexual Health Network. “The violence we experience comes directly from the state through the violent process of colonization as it continues to this day. The idea behind these methods is to work within, outside, around and between state-based methods that also cause harm.”

Growing out of Indigenous ideas of justice, women of colour across North America have been developing community accountability processes and transformative justice models of their own. Montreal organization the 3rd Eye Collective asks what survivors need to feel safe rather than immediately approaching the legal system. Responses range from having other people present during pick-up and drop-off arrangements with kids, or even having members around the house to help cook dinner. Members of the collective also present a list of communication demands and therapeutic resources to the person who harmed the victim. Transformative justice backs away from a focus on punitive measures and assists the survivor in assuring her needs are met. As collective member and Chicana scholar Lena Palacios explains: “The decision not to impose the law was already made for us.”