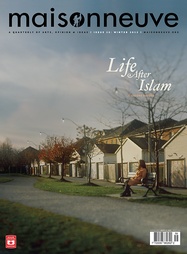 WHEN I TELL PEOPLE where I live in Toronto, I’m quick to clarify that it’s in South Parkdale. You know, the non-gentrified part of the neighbourhood.

I’ve lived just off King Street West for almost four years now, on a street dotted with big trees and pretty Victorians. My little strip is home to a decade-old Filipino take-out counter, the always-busy Parkdale Community Food Bank and rooming houses with weathered men and women lounging on front porches. The many high-rise apartments that sprung out of the sidewalks during the 1960s are filled with the working-class immigrants and families who have thrived in one of the last affordable areas that exists downtown.

One short block north is the other Parkdale, centred around a bustling stretch of Queen Street West where, for a long time, chic cocktail bars and small-plate restaurants seemed to open on a daily basis. It has new million dollar homes, new boutiques and a gaggle of new residents. Over the past seven or so years, the area has transitioned into one of Toronto’s hippest arteries, featuring the requisite premium prices.

But it wasn’t always like this. In the 1970s, the same area was home to many long-term patients after they were discharged en masse from a nearby mental health centre. It became a landing strip for Filipino, Vietnamese and Caribbean immigrants in the 1980s. In the decades that followed, landlords transformed its many mansions into illegal rooming houses. But the neighbourhood started to be redeveloped in the 2000s and today is a Mecca for millennials.

For a while, South Parkdale remained a vibrant hub for the working class despite the changes happening to the north. Then, three years ago, a new bar opened at the top of my street. Located one door down from the food bank, it was named Pharmacy—after the space’s previous tenant. And I was its key demographic: young, local, possessing enough disposable income to buy $7 pints. Pharmacy soon became a destination for the upwardly mobile from all over Toronto. During the day, locals flock to the food bank to pick up bread, fresh vegetables and canned food. And each night comes the migration of leather jackets and skinny jeans. Almost immediately, the divide between Parkdale and South Parkade started slipping. I felt, simultaneously, gentrifier’s guilt and excitement for craft beer on tap.

Change is inevitable in cities. By now, everyone is familiar with the typical narrative: some young artists move into a working class or immigrant neighbourhood and in come the cool businesses, followed by the upscale condos. As these new facets flourish, original inhabitants are slowly priced out of their homes; too often, lower-income renters simply do not fit into the new vision for the area.

When we talk about gentrification, it’s easy to blame a particular group for driving longtime residents out: twee shops, trendy restaurants, people (myself included) who are turning these communities into living Pinterest boards. But the real driving force of gentrification is more structural: it is in a lack of managed growth from city government and underhanded strategies from landlords. Parkdale is smack in the middle of being transformed, but it’s not too late to ensure that its most vulnerable residents don’t get left behind.

IN 2012, Swedish real estate conglomerate Akelius moved into South Parkdale, eventually buying up five of its high-rise buildings. Almost as soon as it arrived, Akelius was accused of trying to push out longtime tenants. Complaints varied: it neglected its apartments by not repairing leaking ceilings, shoddy floorboards or broken toilets; it raised rents illegally; it replaced superintendents with difficult to navigate 1-800 hotlines. After a tenant left or was pushed out, Akelius renovated their suite, bringing in stainless steel appliances and hardwood floors. Where the original one-bedroom went for around $800 a month, it could now fetch up to $1,400.

But tenants fought back. Some beat attempts at big rent increases that were higher than the provincial government allows, while others stormed Akelius’ downtown office with a list documenting their units’ disrepair. Thirty-five tenants complained to Ontario’s Landlord and Tenant Board, alleging reduced services and distress caused by the removal of superintendents. They won their case this summer, with Akelius agreeing to pay out $50,000. It’s a small victory—maybe even a token one—but it invigorated Akelius tenants, who are now reaching out to other renters in the community facing similar issues. “Gentrification has been going on in Parkdale for a long time,” says Cole Webber, a legal worker at Parkdale Community Legal Services who has been working with the tenants. “I think what is new is that the latest push of gentrification is targeting the last places where working class and immigrant tenants can make their home—the apartment buildings. People are taking exception to that.”

Instead of feeling guilty for the role they play in Parkdale’s gentrification, Webber says that young people flocking to the neighbourhood should join the struggle. “Look, we all need places to live and we’re renters. We don’t own property. We don’t own homes. We need to link up across whatever perceived barriers there are because as tenants, it’s in our best interest to counter those of the big landlords and developers.”

PROTESTERS OFTEN ZERO IN ON businesses that they identify as harbingers of gentrification. In London, England, hundreds of people recently protested a café doling out $9 bowls of Cocoa Puffs by dousing it with paint and cereal. Two years ago in Vancouver’s Downtown East Side, residents picketed a new upscale restaurant, asserting that its existence would drive up prices in the surrounding area.

Many business owners don’t mosey into neighbourhoods with the intention of displacing others; in fact, many are drawn in by the existing diversity. Sarah Dougall is the owner of Parkdale’s Made You Look, a jewelry store and studio on Queen Street West. When she noticed the neighbourhood changing in the mid-2000s, she bought an empty building across the street. After she decided to rent it out in 2011, Starbucks—the unofficial mascot of gentrification—was one of the first to come knocking. But rather than rake in a huge profit, Dougall opted to rent to an independent fashion boutique. “If I did decide to lease it to Starbucks, there would be a warrant out for my arrest. I would be slaughtered at the stake,” Dougall laughs. “But that’s not the neighbourhood I want to live in. I don’t want Parkdale to turn into an outdoor mall.”

As Parkdale evolves, Dougall argues that there’s enough space for new businesses and longtime residents to co-exist. “If you were to analyze all the shops from Roncesvalles to Dufferin, there would still be a good majority that are not run by hipsters,” Dougall says. “There are still your average Joe, mom-and-pop shops, feeding the local economy.”

And in Parkdale, there’s precedence for choosing the collective good over that of the individual. When the proliferation of nightclubs—and “restaurants” that effectively functioned as nightclubs—along Queen caused residents to complain about noise and vandalism, city hall stepped in. Under consultation from planners, it started capping the number of new bars and restaurants to 25 percent of all businesses in an attempt to better manage the growth. The Ontario Restaurant Hotel & Motel Association vehemently opposed the bylaw, accusing the city of infringing on the free market. But Gord Perks, the local city councillor, argues that Parkdale was reaching a point where existing businesses—ones not focusing on entertainment—wouldn’t have been able to survive without the city’s intervention. “We would have lost a very vibrant and eclectic strip of retail space,” he says.

LIKE MANY OTHER liberal twenty-some- things in the so-called creative class, I possess an unsettling mix of pride and guilt about my chosen home. I feel uneasy encountering men begging for change outside the shop where I was just browsing $50 hats with “Parkdale” embroidered across their crowns, and this anxiety intensifies when people such as Perks voice their concerns over the impact of increasing market values. Yet everyone I speak with—tenants, storeowners and non-profit groups—agrees that new residents (and yes, even fancy businesses) do have a place in Parkdale. In fact, they all argue that homogeneity and stagnation would be terrible for the neighbourhood. “You want to live in a place where anybody from any walk of life can live,” Perks says, noting this mix helps spark creativity, energy and those accidental happenings that make a neighbourhood special.

Gentrification is a dirty word. But it’s not as simple as old versus new, rich versus poor. The looming forces threatening to change neighbourhoods and displace residents will always be bigger than craft beers or a pricy tuque. You don’t need to feel guilty for your shopping habits, but you should if you turn your back on the people who, for many years, have called your neighbourhood home.