Every Friday morning, Jessica and Sally have a routine. After the big hand and the little hand hit twelve, after the lunch bell rings and Mrs. Finnegan dismisses the class, the girls clasp hands and curtsy—Jessica had to teach Sally how to curtsy—and walk outside. They walk arm in arm, because otherwise Sally tries to eat while they walk, which can lead to choking, and when they cross the front lawn of the elementary school, Jessica makes Sally pause and look both ways. Sally could die if Jessica isn’t looking out for her. Jessica has never had a friend like Sally before. The other kids don’t get Jessica, according to her mother. You’re a particular sort of girl, she said once. Of interest to collectors. Sally is the first person in grade three to like gods as much as Jessica does.

When the cars slow, Jessica takes Sally’s hand and they march right over to Mister Zed’s. The store is huge and smells like the inside of a fridge, that bracing scent that makes the itty-bitty hairs in your nose stand on end. Joe, behind the counter, looks up from the comic book he’s reading. “Coming in for your gods, girls?” Jessica doesn’t really like Joe, he has long greasy hair and smells funny, but Sally waves and smiles and blushes. It’s a good thing that she’s friends with Jessica, because Sally could really end up in trouble one day.

The God Machine is at the very back of the store, a big glass bubble on top of a metal base with a lever, painted yellow and green. The glass bubble is full of smaller, plastic bubbles. Inside each bubble is a god, and you never know which one will pop out.

Jessica’s mother bought her first god, hawk-headed Horus, with his sun-eye and moon-eye. They were grocery shopping and Jessica was being very helpful and well-behaved. If Jessica pressed her face to the plastic, she could make out his perfectly serene expression. Looking at him triggered a sensation in the base of her skull, like she could reach high enough to brush the sky with her fingers. Jessica’s mother started to give her an allowance, five dollars every Friday. Running to Mister Zed’s and buying gods gave her something to do at lunchtime, once a week, other than eat alone at the end of the field. She could still make it back before the bell rang if she was careful and didn’t dawdle.

Then Sally walked into Mrs. Finnegan’s class and sat next to Jessica. Some of the other girls tried to recruit Sally, tried to convince her that Jessica was weird or stupid or whatever. “She plays with baby toys,” they said. “Only first-graders like gods.”

“You’re mean,” said Sally, effortlessly, and then she and Jessica were friends.

You never know what god you’re going to get. You can hope, but you can’t predict. The bottom of each plastic bubble has a website printed on it, and you can look up the website at home to find a complete list of all the gods. Jessica’s mother helped her look them up, because Jessica’s mother thinks it’s important for Jessica to know how to use the internet. They printed off a copy of the checklist so Jessica could keep her gods organized.

Insert coins into the slot. Turn the clunky metal lever. A mechanism inside the machine turns, the bubbles under glass are stirred up, one falls down a hole and rolls forward to the mouth at the bottom of the machine. Reach inside the God Machine. Sally goes first because Jessica is nice. Jessica’s belly sings like a cricket while she waits.

Sally gets Thor. The tiny god stands inside his bubble, waving his hammer through the soup of soap and light. Lightning cracks. Sally presses the bubble to her ear, and squeals. “I can hear thunder!” She reaches over and presses it to Jessica’s ear. It’s like a storm in a seashell. Jessica wants Thor. He’s a sky god. Jessica’s hair feels like it’s ready to stand on end.

Jessica’s turn. Money, lever, mouth. She pushes her hand in until her fingers hit plastic. She pulls out her prize—a jackal-headed god. “Anubis,” she says. She wanted a sky god. Sally is busy shaking her bubble and watching the little God of Thunder whipping up a slippery typhoon inside. “Do you want to trade?”

“But I like mine,” says Sally. She doesn’t understand how thoughtful Jessica is, how much Jessica deserves to have Thor, because she’s the one paying for them, because sky gods are supposed to be hers. The insects in her tummy work their way up into her throat and Jessica huffs.

“Um, okay. I guess you can have Thor,” Sally says. “If it’s really important to you.”

On the walk back, while Sally dumps Anubis into her lunch bag and pulls out a sandwich, Jessica stares into Thor’s little bubble and finds herself wondering what a god would taste like. “Have you ever, I don’t know, eaten a god before?” she asks.

“That’s really weird,” says Sally, so Jessica doesn’t say anything else about it.

Lunch hours were easier after Sally showed up because there were two of them. Some days, Sally’s brother drove over from the high school and took the girls out for lunch. He drove very carefully, and he always took the girls to the food court. He usually paid.

He was everything Joe at Mister Zed’s wasn’t. He wanted to go into television when he was older, he smelled like strawberries and he sat and talked to the girls about gods while they ate. It was exciting to have new gods to tell him about: how they were born, what monsters they killed, who they married. 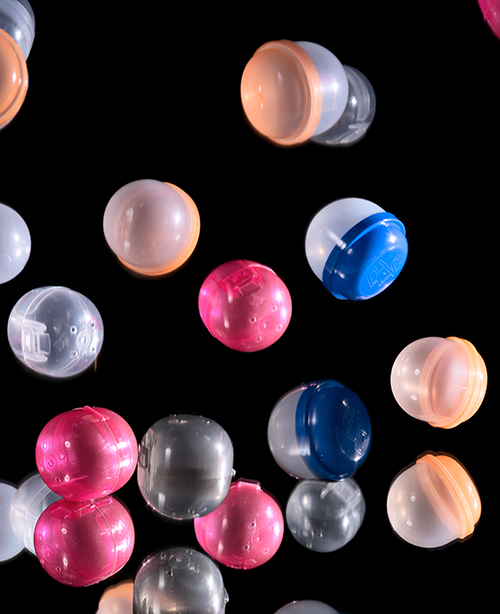 One day, the girls go looking for the first-graders. Jessica wants to trade gods. Sally goes first, getting down on her hands and knees in the sand and wood chips to crawl under the wooden structure of the adventure playground. Above them, the second-graders run back and forth across the wobbly bridge, jumping two at a time off the rails onto the wooden slats to make huge waves. Seeing Sally and Jessica crawling, the second-graders call out, “Be careful! They like to pretend they’re wolves!”

It’s cool down there, sand turning to dirt, the voices and wild footsteps of second-graders overhead. Just dark patches moving over them. And up ahead, the growling, roaring of first-graders.

The first-graders come into view, wrestling and tearing their lunch boxes apart for every stray bite of apple, cheese, bologna. Jessica feels her own stomach growl. They barely look like children, scrounging like animals on all fours, kicking and spitting and climbing atop each other, only visible when slits of light settle on their faces. Others lie on the ground in a distracted stupor.

One of the first-graders splits the plastic bubble of what looks like Poseidon, singing in the goo while summoning miniature tsunamis. The oily contents spill into his mouth. Jessica thinks it must taste like the sound of the ocean, like operas. Jessica licks her lips.

When they get back to Mrs. Finnegan’s classroom, they don’t talk about what they’ve seen.

Jessica never had a sleepover before she met Sally, because most kids stopped wanting to play with her before they got close enough. Jessica and Sally sit side by side in sleeping bags. Sally’s mother pokes her head in and says, “Lights out!”

“Good night,” they say. Sally’s mother flicks off the light. After she’s gone—Sally gets up and checks, her ear pressed to the door—Sally pulls out a flashlight. Jessica pulls out a plastic bubble from her backpack.

“Who did you bring?”

“Do you want to play Truth or Dare?”

Sally brought Truth or Dare with her when she moved, an old game she played with her old friends. It makes Jessica uneasy. “Okay.” She lies back against her pillow in the darkness, the only light coming from below Sally’s face, and the sparks inside Thor’s bubble. Sally always goes first, so Jessica has to ask: “Truth or Dare?”

Jessica has to come up with a question she doesn’t know the answer to, and that means a question she probably doesn’t want to ask in the first place. “Did the first-graders under the playground scare you?”

Sally rolls her eyes and shines the flashlight right in Jessica’s eyes. Jessica puts her hand up to block the light. “Of course they didn’t scare me.”

“But you got all weird afterwards!”

“Why do you care about gods so much, anyway?”

“I dunno.” They make her stomach sing when she stares into a little plastic bubble, runs her fingers along the seam. “I just like them, I guess.” Should Jessica have asked Sally why she giggles every time they see Joe at Mister Zed’s? “Truth or dare,” she says.

Sally doesn’t complain or refuse. She leans over and kisses the plastic bubble between Jessica’s fingers. “Your turn. Truth or dare?”

“Eat Thor,” says Sally, shining the light back in Jessica’s face. “You were thinking about it.”

Jessica doesn’t move. Thor’s totally her favourite. Only Jessica can’t help but sniff the bubble, work her fingernails into the seam. She could pry it right open. Should she drink the juice, or just pluck the little god out and put him in her mouth?

“Come on, Jessica, I dared you. You have to eat the god now.”

“I don’t want to play anymore.”

The two plastic pieces open with slick, soapy light dribbling out from between them, all over her fingers. She thinks about her mother eating oysters over the kitchen counter.

Jessica can’t answer—she was expecting to be repulsed, to spit Thor out without thinking, but she finds herself swallowing instead, swallowing like a lock swallows its key. She wants to answer Sally, but it’s too difficult, it’s like her brain has a thunderstorm flowering inside of it.

She opens her eyes.

“Whoa! Your—” Sally shuts her mouth.

Sparks fly from Jessica’s open eyes, and she can feel them along her tongue, like when Mrs. Finnegan showed them what happens when you bite down on aluminum foil.

“I don’t think I want to eat one,” says Sally, and she shuts the flashlight off. She caterpillars deeper into her sleeping bag. “I don’t think we should play anymore. We might get in trouble. My mom might come in.”

“No, don’t be dumb. This is my house, I make the rules. We’re not playing the game anymore. I’m not—I don’t want to. Now, go to sleep or I’ll tell my mum and then your mum will have to come get you.”

Jessica can feel the slick fluid on her fingers, see the emptied plastic halves on the carpet beside her sleeping bag. Something spikes angrily inside, like, how dare she deny me. Jessica shouldn’t have eaten Thor, of course she shouldn’t have eaten Thor, though the memory is—it’s like someone’s run their fingers through the memory until it smears a little bit. “I’m sorry I scared you,” she says, to the darkness, and closes her eyes when Sally doesn’t say anything in response. She goes to sleep, trying not to think about all the bubbles full of gods lying ready on Sally’s bookshelf.