The rain on the window woke him. He looked through the makeshift curtain thumbtacked over her window; it left an irregular opening that let in too little of the timeless grey morning light for him to know if it was late or early. Trying not to wake her, he slipped out of bed and found his shirt on the floor. She inhaled sharply when his weight left the bed, but did not wake.

Water poured against the windows. Her fourteenth-floor apartment was often within the cloud ceiling on a rainy day and the presence of the clouds this morning shrank the world outside. He moved through sleepy flashes of dream fragments. Memories, moments before or years after they happened, passed as if looking up at the surface of a lake from underwater, the sunlight shifting in a wave. But whatever pieces of dream or memory were floating by didn’t matter now. What mattered was coffee.

He padded out of her bedroom and into the kitchen, which was more of a hallway between the living room and front entrance than a room itself.  He reached for her stovetop espresso maker and twisted it open. Even with her gentle but mocking instruction, it had taken him weeks to decipher. Now, the tactile ritual was something he relished. Dismantling it, filling it with coffee and water, offering it to the electric element. He set the coffeemaker on the stove and waited.

His mind wandered back to the body of his lover. He frequently lost himself in her dark skin. In the moments of their lovemaking, she was infinite. In the world outside of her apartment he would find himself suddenly distracted and absent from conversations, reliving a shared breath, the smell of her or the feeling of her hands on his upper arm as he took the length of her womanhood in his mouth. Whatever fears he had initially about being attracted to a trans woman had faded.

So much of loving her had shaken how he understood himself. Before knowing her, he had carried himself with the arrogant confidence of someone who felt they knew the world. But he had been describing a river from the viewpoint of a water glass. The normalcy he’d always expected had shattered and shifted; there was a vastness to the world he’d never had to think about before, a way in which he’d taken his existence for granted.

The last evening in bed, their had arms drifted over each other’s bodies. Skin rising and receding, the connection of waves. The perfect roundness of her stomach against his forearm. Her grace as she turned herself over, as if spinning in a current. His palm sailing along the side of her body, settling on her thigh, oceanic. Her body, its engulfing beauty and power, was not something he had ever taken for granted. The espresso maker started to hiss. He put the kettle on.

He’d met her as part of a cruel dare, a challenge from friends at a bachelor party, a group of guys he didn’t see anymore. They had spotted her talking with the bartender. One of his friends had seen she was trans. In a mist of jeering and goading he left his friends and approached her at the bar, asking if he could buy her a drink. She looked at his friends, who were bent over with laughter, and stared at him blankly, locking eyes with him. His mouth opened slightly. All the expectations of what she would look like in close quarters and how she would react to him faded. He felt ashamed. “No, thanks. I’ll buy my own,” she said, turning away from him. His face flushed. He stammered an apology, imagining how horrified his grandmother would be to see this. Trying to humiliate a stranger. “What?” she said harshly, not turning back to face him. “I’m sorry. That, um... that wasn’t cool,” he tried again. She turned to face him, “Offering to buy me a drink? It’s not cool to ask to buy a beautiful woman a drink? Get over yourself. What are you anyway? The token Asian guy in a group of white frat boys? Piss off.” She turned away. He noticed the bartender move closer and watch him intently. He tried again. “No, not that.” He paused, twisting his face, struggling to find his words. “I would like to buy you a drink,” he managed. “But, I mean, my friends,” he gestured behind him with his thumb, “they’re not so bad, but it’s not cool that they were laughing at you, it’s just that—” She cut him off.  “Just stop. If you’re gonna be an asshole, follow through. Or get some new friends.” She turned to the bartender. “Hey Nam! These jerks are giving me trouble, do you mind?” The bartender waved to the bouncer, pointed to him and his friends.

The espresso maker gurgled and the smell of coffee washed over him, relaxing the headache slowly building at the base of his neck. 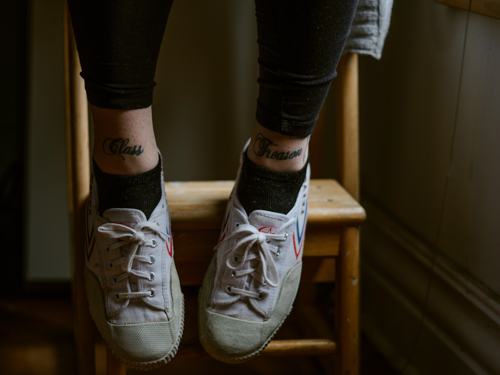 Waking to the sound of the espresso maker, she exhaled, pulling open her eyes. It couldn’t have been much louder that the rain, but her sleeping mind had easily parsed its sound from the steady tapping of raindrops on her window. Peeking through the bedsheet curtains, she found her apartment lost in the clouds again. He was making her coffee. He always made her coffee when he stayed over. She was beginning to take it for granted, starting her days with a lover’s offering. She knew she would never actually take it for granted, but she liked to think that she could. She stretched in bed and smiled—he was clumsy in his day-to-day actions, but handled her body with the confidence of someone consumed.

Last night, in the midst of losing themselves in each other, she had turned her back to him while gripping his hand. She ran her nails down his arm, from wrist to shoulder, tracing the contours of his muscles, noticing the rougher skin of his elbow before wrapping her hand on his clavicle and pulling herself closer to him, her neck connecting with his mouth.

She let herself be suspended, timeless, breathing in the smell of him still held by the pillow. Rolling over to the edge of the bed, she dangled her arm towards the floor, searching for her glasses. Before she found them, her hand knocked over his half-glass of water from the night before. She did this often. “You should get a bedside table,” he’d told her once, standing in her room as she sat on the bed. “You should buy me one, or stop leaving water on my floor,” she’d responded, pulling him onto the bed, flipping and straddling him. “I like hard woods, a dark stain and something with drawers. No glass tops. Get me one like that,” she’d said, pinning him. Laughing, he tried to roll her off, but couldn’t. She held him down like this occasionally and she guessed she would continue to do so as long as she knew him as a lover. To remind him of her power, and so she wouldn’t forget it either. The only time he’d managed to break her hold, he’d lifted himself enough to kiss her neck and her grip had loosened, her energy refocused.

She hadn’t trusted him when they were first getting to know one another. About a week after he’d tried to buy her a drink on a dare, he’d come back to the bar looking for her. She was sitting at the bar, as she often was between appointments, talking to Nam. Nam nodded to her with a mild scowl, signalling for her to turn around. She looked over her shoulder to find him walking towards her, wringing his hands, stopping immediately when she saw him. “What do you want?” she said, flatly. He tried to say hello but she reiterated: “Yes. Hi. What do you want?” She enjoyed how uncomfortable she made him. “I thought, maybe I could buy you that drink?” he managed. She laughed loudly, threw her head back and away from his words. “You’re too much. Really.” She expected him to turn and walk away, but he stayed. “No, seriously. I’d like to buy you a drink.” She looked him up and down. He was shy, his shoulders bent slightly, probably because he’d been such a jerk when they met. He stood a few feet away from her, looking at her, not forcefully, but honestly, it seemed. She let her eyes meet his for a few seconds. He did not look away. “I’ll tell you what. I gotta go take care of something. I’ll be back in a little more than an hour. If you’re still here, I’ll have a drink with you.” “Really?” His face opened in a smile, eyebrows rising. He was cute, she thought. “I can’t believe I’m doing this,” she said, getting up and walking past him. When she came back two hours later, she found him waiting at the bar, talking to Nam.

After finding her glasses, she rolled back over on the bed. He was moving in the kitchen; she could hear him getting mugs. He told her later he’d come back to the bar that night because he was ashamed about how he’d treated her. He didn’t make any excuses for himself; he didn’t try to pass the blame to his friends. He said she’d been on his mind. He didn’t even live all that close to the bar, she later found out. Forty-five minutes by bus. She asked about his friends and he said that after they’d been kicked out by Nam, he’d told them all off. He hadn’t seen them since. “Looks like I did you a favour,” she’d said. He’d nodded earnestly. “I owe you one.” She made him take her on five dates before she kissed him.

She listened to him slide a mug across the counter, adding hot water and milk, then repeating. His bare feet padded down the hall and into her room. She sat up a bit. He was grinning as he came into the room, his small belly moving with him as he smiled, proud of himself. He was beautiful and he knew she loved this ritual. “I made you some coffee,” he said. “I spilled your water all over the floor again,” she replied, taking the mug from his outstretched hand. “Oh good,” he said. “I didn’t need it anymore.”