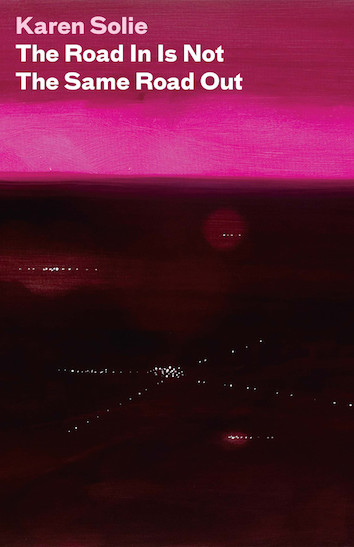 The often fulsome praise for Karen Solie’s early work has proved prescient. The Road In Is Not the Same Road Out, Solie’s fourth book of poetry, is her strongest collection yet. After the publication of Pigeon, James Pollock hailed her for her “triple vision of the world,”—what he called a “sardonic satire of contemporary life,” a “pastoral vision” and “sympathy for other human beings.” The Road In adds another vision: the voice of a contemporary prophet.

“The Corners” tells of “a timeless sublegal / entrepreneurial spirit [that] flourishes over which laundromats preside / geologically.” In “Via,” “hills of scrap aluminum glitter / like a picnic ground in heaven.” In “Mole,” the speaker observes that the animal “ducks horrors the surface / churns out” such as “trowels to flip him over the fence into the neighbour’s / as though that doesn’t hurt.” Everywhere are signs of human destruction. Notably, Solie doesn’t leave her other visions behind, extending that element of sympathy present in her previous collections. “Fables of the Reconstruction” tells of a homeless man who “must negotiate” the holes left by the “Bobcat, excavator, trackhoe,” who himself “is a hole in the landscape.” The marginalized are consumed right along with the earth itself. What’s more, many of the poems are written from the vantage point of someone who lives in a safe country and observes the demise of the world from a screen. In “Sault Ste. Marie,” the speaker observes that three days is “the time it takes iron ore pellets to ship by water,” the same time it takes “mercenaries to shoot 233 protestors in Tripoli / / according to the flatscreen above the lobby bar.” Political turmoil becomes the most banal form of entertainment.

Not that the book is simply a jeremiad—it’s much more subtle. Any hints of society’s imminent downfall are implicit and complex. In “Via,” the speaker observes that “in trackside yards roam brightly / / coloured polymers of contemporary / playtime … Wholesale Monuments. Everywhere / motives on display, arguments with the ideal.” That line—“arguments with the ideal,”—gives the ugliness of contemporary life a softer, more human side, and is where Solie moves from mere prophet of doom to poet. The ending of “Via” continues to transform a banal expression of doom into a moving, personal expression of one’s relationship to a destroyed landscape:

It’s no use to look within. These towns,
like your own, lived in or yet to be, are forever inadequate
to the secret self who forges ahead, calls
from beyond any given incorporation, from the fog
in which the railbed steals, with your own
better voice. It will catch you living somewhere
nearly by accident, but fluently, to all appearances
the station you were born to.


The “secret self” that “calls from beyond any incorporation” with “your own better voice” introduces a still, small voice of comfort into the otherwise bleak prospect of the corporatization of every aspect of individual life. The choice of the word “station” suggests that perhaps technology (trains, in this instance) can co-exist with one’s “secret self.”

Indeed, the more interesting conversation in this book relates to the nature of private thought in a globalized world. In “Museum of the Thing,” the speaker writes against Eliot, of “the objective correlative, tired of me / as I am of it”; he talks about “a derelict potato chip factory / co-opted to ventriloquize one’s state of mind.” He then turns to directly address his self, a self that, in such a world, has become utterly inaccessible: “Dear being, how might I / responsibly interpret your incomprehensible / behaviour? Where am I in it?” The self is difficult to know in a world in which things, and even people, exist purely as repositories for our states of mind. The relationship between self and world is at best fraught, and at worst produces harm that is, to use the last word of the poem, “mutual.”

It is no coincidence that “Museum of the Thing” is placed next to “The World,” which opens, “When I learned I could own a piece of The World / I got my cheque book out.” Across three pages it punctuates abstractions with crude, unpoetic detail of the material possessions that make up our lives: “One can ignore neither / the practical applications nor the philosophical significance of our onboard jewelry emporium … without which / there is no life of the mind.” The economic basis of our thought life—the luxury of it—is partly what makes it problematic, ugly even. And yet in contrast to the specifics that litter our lives (and the poem)—“$12-million inventory,” “OLED high-def screen”—sit abstractions: “The World” is repeated throughout and capitalized each time. This preoccupation with the ineffable runs throughout the book; the word “thing” or “things” appears thirty-one times. There’s something here that Solie can’t quite name. But she’s trying to, and is doing it by looking again and again at the effects of our economic activity on the life of the mind.

“Bitumen,” the longest poem in the book at seven-and-a-half pages, sweeps through all the consequences of our greed: nature as victim (“Humiliated, blinded”); the loss of the sublime; consumption of “the perceivable world”; loss of human life; the uglier side of human indifference to these things, or only caring about them only insofar as they threaten “our flight plans”; our ruining of the sublime; the replacing of a Maker with the Market (“where is thy market now?”). Almost every line of this poem hammers home the point, or at least looks at a new aspect of it, and accusations exist in the line breaks: “Fear not, we are worth more than many sparrows. / They pay for insignificance with their lives. It’s the structure.” This is an ironic and biting twist of biblical wisdom and the speaker couldn’t be more clear about the problems that arise when the market determines not only morals but also the way in which we attain self- and other kinds of knowledge.

And herein lies one of the weaknesses of the book. There’s an element of preachiness in it. Too often the speaker says directly what her main point is—and might as well write a poster instead. This happens in “The World,” for instance, where the speaker bursts out, “Familiarity / without intimacy is the cost of privacy, security / of a thread count so extravagant its extent can no longer be detected.” It’s not a great image and the directness is ineffective.

But it’s not all doom and gloom. Solie at her subtlest is far worth the less moving parts of Solie at her preachiest. The opening poem is a perfect sample of the range of Solie’s skill, of her ability to restrain her language, giving it a density and lighting each word on fire with meaning. “Ode,” in a nod to Chaucer and Eliot, opens the book with a shrill and continues on in on a note of discord: “Blue jay vocalizes a clash on the colour / wheel, tulip heads removed one by one”—starting with three stressed syllables no less, and some hard alliteration thrown in. We open the book to find that something is wrong. Notably, humans don’t appear until the third stanza, and then it’s “someone,” and that someone is “in bed at 11 a.m.” This is a new kind of spring, and a new kind of cruelty: it is not April that is cruel—it is we that are cruel to it.

The consequences of that are spelled out in no uncertain detail throughout the course of the book, but it is worth looking closely at the poems for the more subtle effects of it, for the structures of hope and hints of what the road out might look like.

Laura Bast edits law textbooks by day and writes poetry reviews by night. She did her MA in English in Halifax but now lives in Toronto.