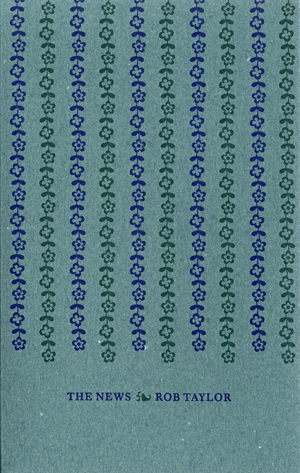 Kim Fu: I'm very interested to hear how you experienced this book, as someone with some “news” of your own! Given the structure of The News, do you mind if I start by asking how far along you are?

andrea bennett: Ha, sure. As of May 12, I'm at ten weeks. I basically look like I've been eating a lot of carbs.

ab: That part made my stomach drop! I thought they'd lost the fetus. Yes, I’m at the stage where Taylor’s narrator talks to God “directly,” with “no vessel.”

KF: The fear of losing it is certainly part of that poem. I interpreted it as being about relinquishing control, in a state of fear and uncertainty, to God—and to medical science and bureaucracy.

ab: Yes, it's signalling fear, instead of a foregone conclusion. It's a quiet moment, an intimate second-person moment, before we move to week eleven, which documents the Bataclan massacre in Paris.

KF: That brings us to one of the major themes of the book. The way it uses the other meaning of “the news”—current events reported in the media—I saw as grappling with the optimism and self-doubt involved in bringing children into a troubled world. And also how having a baby positions you in the world: it’s the biggest news in the world, the most important, most miraculous thing, and yet simultaneously so commonplace.

ab: The title's play on “the news” sets up this duality perfectly. I can empathize with and appreciate, as a reader, the way Taylor grapples with both of these things, but the idea of bringing a child into the world requires something different from me. I'm not an optimist. It requires a suspension of disbelief, otherwise I don't think I would be able to do it. It's like my own mortality: the only way I can live, day to day, is to put it out of my mind.

KF: Can you expand on that? What you mean by “suspension of disbelief” in this case?

ab: I am thinking mostly of global warming and political instability—my partner and I are both white, so I don't identify so personally with the police brutality against Black bodies and Black children, for example, which also comes up in the book—it's as close and painful now as it will ever be. I feel sick at the injustice but know that my kid will be born with white privilege.

By suspension of disbelief I mean when I think about raising a kid I keep the focus very close: what will Will (my partner) and I do? How best to love, to set boundaries, to teach love and respect? Where will we live next? Will we be able to make ends meet? Will the baby be healthy?

I am not thinking about what global warming will mean for my family unit, not in that direct way. I am not thinking about Donald Trump's proximity to nuclear weapons. If I thought about it—or, glurb, any of those kinds of “overpopulation” arguments you can find on Reddit or whatever—I might just say fuck it.

KF: Do you think Taylor arrives at any conclusion about that, about having children in the face of political and ecological instability? Do the poems “justify” it, for lack of a better word?

ab: No, I don't think he comes to a conclusion. That's part of the power of the book: he learns to grapple with and live with this uncertainty, which is, I think, a lesson all parents have to learn eventually. You can't have control, you can't hold on. I sort of wonder if this is something the non-gestational parent, if there is one, needs to grapple with first?

KF: Why do you say that?

ab: For me, at ten weeks, the fetus is literally part of my body. I am nauseated all the time. I am tired. It is my body with a fetus. Will is watching on. As much as he cares, as much as he's invested, he's necessarily watching on.

KF: Ah, that's a really interesting idea. So you think the non-gestational parent has more space for abstractions and questions of this nature?

ab: I'd be super interested to hear from other gestational and non-gestational parents. It feels, to me, like the non-gestational parent might have more of that space. It feels like a huge responsibility to carry a fetus to term. To navigate food repulsion in order to eat properly; to avoid all the things you're supposed to avoid; to sleep well; to limit your caffeine; to keep going to work every day even if you'd rather be curled up in a ball in bed.

The potentiality of having a child in December (!!) is something I'm living through every day in a physical, embodied way. I think for the non-gestational parent—I can only guess—it's necessarily less physical, and so if they're working to prepare themselves, then maybe that preparation happens more philosophically.

KF: The other big theme of the book, to me, was the metaphysical nature and status of an unborn child. There's a lot along the lines of “what are you, what do I call you, how do I think of you?” Which is interesting in light of what you just said. For you, as a gestational parent, the fetus is not a being/non-being of an undefinable spiritual nature, it's a physical part of your body that's sapping your resources in the most visible, concrete, overt way—if I'm hearing you correctly.

ab: Yes, that's exactly how I feel, though, as usual, you cut right to the point!

The poem at nineteen weeks is an interesting example of philosophy's rubber hitting the road. It begins: “We brought you into this world / and we can take you out / legally for the next week or so.”

From my reading, and correct me if I'm wrong, Taylor used to be fully pro-choice but now that he's been “talking” with his to-be child, is only “up for exceptions.”

I'm pro-choice, but I've always felt and known that my choice would be to carry to term. I've always wanted a kid, I have support systems in place to be a single parent with close friends or family. So being pro-choice was, similarly, theoretical. Now, carrying a fetus, it's much more concrete: things go wrong. I could very well personally need an abortion. It's a real thing I could face this year. When I think of going to a clinic with pro-lifers protesting outside... I'm not sure what I'd do. End up with an assault charge, maybe.

Wanting a kid and being pregnant has brought the absolute necessity of legal, accessible abortion home to me.

KF: Wow, I had precisely the opposite interpretation of the poem as you did!

All this talking with you
convinced you were someone,
sending my politics out into the field.
We would have kept you no matter
your flaws, your mother insists,
in the name of love and protection.
The man I was would have agreed,
would have said the words first.
Now all I am is up for exceptions
[emphasis mine]

I thought he was at least personally pro-life before this—at least against abortion for himself—but now he feels muddled and uncertain. I can see how you read it the way you did, though, given the “convinced you were someone” and how loaded “exceptions” is.

ab: I think both readings are possible. Poetry's beauty is in its ambiguity, I guess!

I'm curious—did becoming an aunt, for you, change any theoretical fetus- or kid-related stuff?

KF: Hmm. My sisters are very scientifically minded, and were very open about their experiences with pregnancy, childbirth and newborns, and I was up-close-and-personal for a lot of it. And I did wonder how anybody who'd ever even been close to someone having that experience could want anyone to go through it unwillingly. But, of course, there are lots of anti-choice mothers.

I have spent a lot of time caring for other people's babies—my family calls me the “baby whisperer”—so I might have a more experiential sense of how hard and crazy-making (even dangerously crazy-making) it is than many childless people. But it didn't really change any of my visceral or cerebral-political feelings about abortion. I have always been very adamantly pro-choice. In part because I used to be religious, and then was sexually active at a young age, so pregnancy at one time seemed like a source of terror and life-ending shame.

I think in general I am less politically radical than you, more centrist, but reproductive rights are one area where I can’t debate good-naturedly. I understand where anti-abortion people are coming from in the faintest abstract, but I think they are 1000% wrong and responsible for all kinds of death, mayhem and misery, and I always have.

ab: Our not-really-differences in this respect came up when we were working on “No Choice.”

KF: I don’t know if comes through in the piece, which I still believe is eminently fair, but yeah—I remember you had more ethical qualms about infiltration than I did, and more sympathy for the humanity of some of our pro-life sources. And so you made deeper, all-day-ride-along connections, while I tended to ambush and work towards difficult, bridge-burning questions. But our differing strategies were ultimately good for the piece, I think.

ab: Getting back to the book, in “Thirty-Six Weeks,” Taylor writes:

All this speaking to nothing
and pretending it's you,
though you are ever nearer
and will one day spot
within these words
the man I was.

So the imagining goes one step further: his kid will be able to read the record of this philosophical grappling, will be able to talk back. I'm curious about that. In sixteen years, I'd like to read a chapbook: The Comment Section.

KF: I’d be interested in a version of this book annotated by his wife, for that matter. Particularly “Thirty-Two Weeks,” where, if I understood correctly, he goes somewhere pretty and alpine to hike and write poems, ten hours away from her and unreachable by phone, probably as a last chance for that kind of solitude. He worries about something happening while he's away, but... Well, I would have loved to know what she was doing and thinking about that week.

ab: I had that thought, too. I'm not sure about annotations or response poems or integrated messages—I'm not sure about the idea of inserting anything into the book, because it would then become a different book, and this one is interesting on its own merits. But I totally would have been interested in seeing a Q&A between Marta (we just get her first name) and Taylor. Some kind of post-book conversation.

KF: Yes, it's very interesting on its own merits, within the boundaries it set for itself. I just found my thoughts often drifting to Marta, as kind of a missing centre. Many good books have that shape—pretty much any book addressed to or about someone. It's a donut-shaped book.