SOUND IS A DIFFICULT THING to describe, but with his hands covered in barbeque sauce, Dan McKinnon is doing a bang-up job. A twenty-six-year-old ad sales rep for CanWest and a serious jazz aficionado, McKinnon lent me a CD a few weeks before: tracks from some late-seventies gig in a Montreal bar. They were crudely recorded, but I couldn’t stop listening. Just a guitar and bass, the duet was gorgeous: warbling, sharp, earthy.

“You know,” he says, scrunching his face and waving a rib for emphasis, “it just sounds good.” And there you had it. As if the tunes had been simmering in a pot, and the player—a Montreal guitarist in a three-decade-old set—was serving it up, hot, just for the listener.

McKinnon is talking about Nelson Symonds, a late friend and barbeque lover. And, as it happens, a Canadian jazz legend. The sort of legend adored by critics (the Globe and Mail’s Mark Miller described his sound as “jagged and cutting”) and those who shared a stage with him (like B.B. King). But also the sort of legend who could influence a generation of Montreal jazz musicians and be plumb forgotten decades later. At the time, even stateside greats recognized him. Symonds’ friends like to mention a 1960s American television interview with Wes Montgomery. When the jazz pop great was asked who he was listening to, he had two names: Charlie Christian (Montgomery’s idol, arguably the inventor of the guitar solo) and Nelson Symonds. 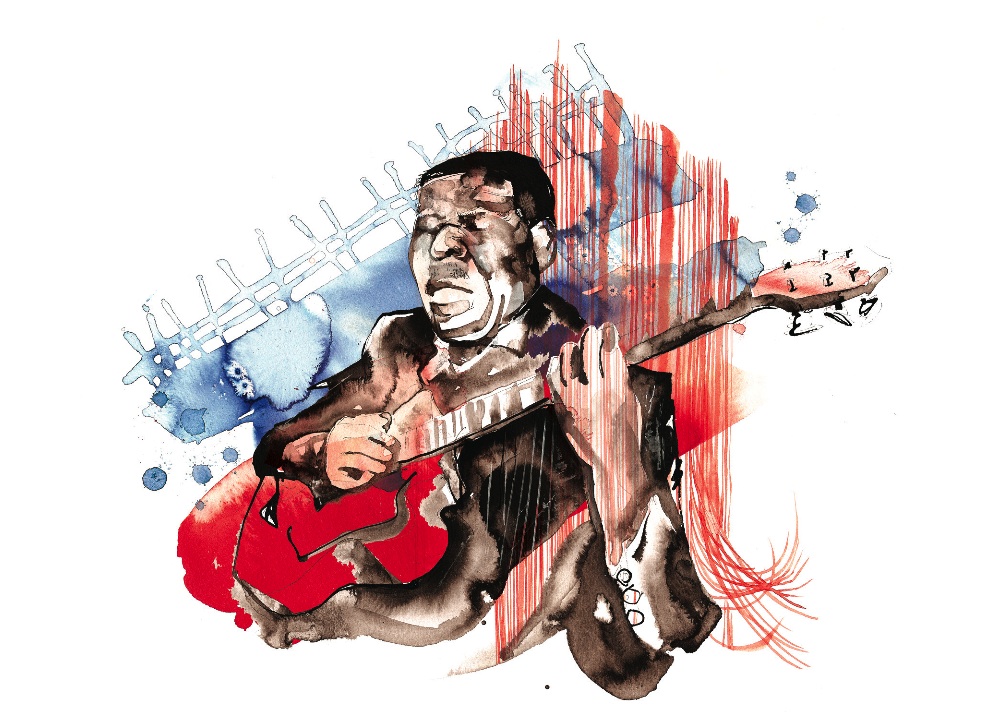 Born in Hammonds Plains, Nova Scotia in 1933, Symonds worked on his father’s sawmill from the age of fourteen. He learned banjo from his Uncle Freeman “through the barn door,” as he’d say, watching his uncle and other family members play in the front yard, at picnics or community dances. By 1955, he joined a touring carnival, backing dancers throughout Ontario, Quebec and the US.

Jazz composer Vic Vogel first saw Symonds playing ballies—ten-minute teasers—outside the carnival tent in Grand-Mère, Quebec in 1956. “I told him, ‘Nellie, you gotta stop playing this carnival crap and come to Montreal!’” Three years later, “Nellie” was playing nights at the Vieux Moulin on Sherbrooke and Esquire Show Bar on Stanley. By 1964, he led his own trio at the Black Bottom on St. Antoine: Symonds on guitar, Charlie Biddle on bass, Norman Villeneuve on drums.

On most nights you could walk into any number of bars—the Black Bottom, Rockhead’s Paradise, Café la Bohème—and see Symonds at work: unassuming, medium-sized, with round cheeks, deep-set eyes and a panel moustache. Dave Turner, a Montreal saxophonist, would sneak into la Bohème, underage, friends in tow. “He would always start his solos slowly, very soft, not a lot of notes, and by the end of it he’d just be speaking in tongues. The whole room would be vibrating.”

Lolling his head from side to side, Symonds would race up and down the neck of his red Gretsch Sal Salvador so fast that single notes crammed into chords, often forcing his band mates to switch to half time to keep pace. Symonds did things with his guitar that went beyond the idea of capital-J jazz. As Miller put it: “his improvisations are headlong, careening almost out of control, as if he can’t wait to be done with this particular note, that particular idea.”

Those old enough to remember often cite Symonds’ nights at the Black Bottom as among the best of his career. Out-of-town acts—Miles Davis, John Coltrane—would drop by after their gigs to see what all the fuss was about. Once, at the end of Symonds’ set, Davis pulled him aside. “What’s your story, what you playin’?” he asked. “Hey man, I do what I can,” was Symonds’ answer. “I like it,” said Davis, but it’s hard to tell if Symonds did. He was constantly self-effacing about his licks, sometimes to his own detriment. Whenever friends asked him to record albums with them, they got the same response: “Man, I gotta practice. I’m not ready.” For the most part, Symonds wasn’t interested in any aspect of the business that didn’t take place in a smoky club.

In 1996—the very year he was awarded the Oscar Peterson Award at the Montreal Jazz Festival—the live shows were snatched away. A heart attack convinced Symonds to stop playing. “They put this thing on my heart, man,” he told Vogel after quadruple-bypass surgery, “and it’s beatin’ like a twelve-year-old!”

Afraid the grind of working nights and playing hard would put him back in the hospital, Symonds took to watching soap operas and listening to baseball games on the radio in his studio apartment. When McKinnon first caught up with him in 2006, the lonely seventy-three-year-old was brimming with stories.

For McKinnon, it started out as a school project. He’d studied guitar at York University, and after hearing tales from professors about a gifted but reclusive guitar player in Montreal, he spent months looking for a recording. He finally found one in 2006—a collaboration with Dave Turner called Thank You For Your Hospitality—and was hooked. McKinnon then tracked down musicians Symonds had played with and got his number.

Friends of Symonds warned of his shy streak, but McKinnon phoned him up anyway, if only to say he was a fan. Instead they chatted about sports. (“I asked, ‘Did you watch the Leafs game last night?’ He gave me the full analysis.”) Then women. And finally, music.

“You’s a greasy player,” Symonds told McKinnon when they first jammed together, “but you could be greasier.” For players of Symonds’ generation, this was education. “When he’d meet the stars of the genre of that time,” says Greg Clayton, a Montreal guitarist who learned from Symonds, “Art Farmer, Wes Montgomery, whoever—they were all free with their information. It was sort of this social contract, you pass on what you know to the next generation.”

Most of this mentorship happens in universities now, in the way McKinnon studied at York, or how Clayton teaches at Concordia. “Different from the type of scene where you’re hanging out with all the hookers and the pimps,” says Clayton, “what some would call ‘the bad ol’ days.’ And with that transition from the nightclubs to universities, some of the charm and the angst that produces the music gets lost.”

“It’s why you have so many little places like this playing jazz music,” he says, referring to Kaizen, a trendy sushi bar in downtown Montreal, where he’s on the bill tonight. Kaizen seems a world away from the environment that nurtured Symonds: plush carpets, slick-haired servers, expensive table centrepieces. But at three nights a week Kaizen is steady work, and a rarity in a city that has gone from hundreds of union-member clubs in Nelson’s time to less than a quarter that number today.

“I was doing a gig at the Smithsonian Jazz Cafe in Washington, DC,” says Clayton, “and people said, ‘Oh! You’re from Montreal! Boy, that’s a real jazz city.’ Everybody sees it that way, even though it’s no longer true.”

Though it was true thirty years back, before the Montreal Jazz Festival arrived in 1979 and turned the city’s jazz scene into a once-a-year affair. Later, organizers began to include acts like Prince, Cat Power and Public Enemy in their ever-expanding interpretation of a genre once defined by those “bad ol’ days.” As a result, most of the regular live jazz remaining in the city moved out of the strip clubs and bars and either went upscale or campy—or the way of the Hard Rock Cafe. Nearly every club that helped make Symonds a nightlife fixture has since closed down.

One night in June 1965, Symonds was playing the Black Bottom with his organ trio: him on guitar, Buddy Jones on organ and Billy McCant on drums. It was late—late enough, at least, for John Coltrane to finish his show at Le Jazz Hot and drop in to watch the last set. When the group asked him up on stage to play, he shook his head. “Don’t want to ruin it,” Coltrane told them. “This is the best organ trio I’ve ever heard.” He asked Symonds for his number instead, and called him the next night he was in town. This is where the story gets a little unclear. Some say Coltrane invited him to go on the road. Symonds insists it was just to play. Whatever the offer was, he turned it down.

“I really like Montreal,” he explained to McKinnon years later. And who could blame him? At the time, it may have been reason enough to stay. “I’m here in the city I love, with some of the best musicians in the world. Why would I want to leave?”

Symonds stayed, but it was jazz that left the city. And with Symonds hesitant to record (only two albums resulted from his career; the rest are crude recordings that get shuffled around like trading cards), his hard-swing feel and swift chord solos were almost forgotten. When he passed away in 2008, though, Symonds finally seemed tired of saying no.

“I went to see him at the hospital a couple of days before he died,” says Vic Vogel. “I told him, we’re getting ready to do a tour. And he said, ‘Yeah man, I’m gonna come. I think I’m gonna be ready soon.’”