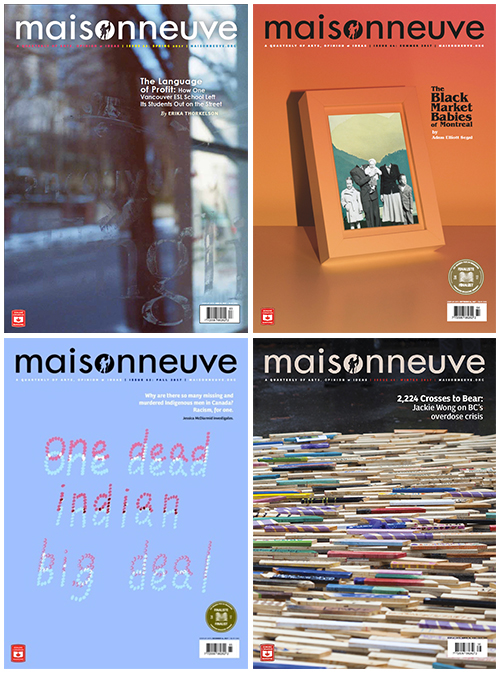 Our eighth annual round-up of the most-read pieces, from cover stories to blogs, posted on the Maisy site. Here are 2017's top reads.

Robyn Maynard on our nation’s forgotten and far-from-over history of populist anti-Black violence.

How a new women’s library in Vancouver became a battleground in the fight to define feminism.

Historically, Italians were called ignorant, subversive and prone to violence. While the groups of immigrants coming to Canada have changed, prejudices towards them have not.

Religious matching and lax anti-trafficking laws led to a booming underground market for infants in mid-century Montreal. Adam Elliott Segal, the son of one such adoptee, investigated this forgotten chapter of Montreal's history for our Summer cover story.

1. "Canada Reads: The MRA Discussion Board Edition?" by Alicia Elliott

After a week of sometimes-heated debate, writes Alicia Elliott, this year’s Canada Reads jury determined what Canada needs right now: to continue being its problematic self.

2. "Pitching: An Editors' Roundtable with Haley Cullingham and Erica Lenti" by Andrea Bennett

In this excerpt from Making Room: Forty Years of Room Magazine, Amber Dawn argues against scarcity and shame in Canlit, celebrating the opportunities that diverse writers create for themselves.